When we returned last spring from a few days in Paris, M's bicycle was missing, disappeared from our courtyard where it had been locked up to a permanent rack in the company of a fleet of much nicer rides. This seemed weird in Berlin, where people leave their bikes overnight locked only to themselves with puny, easily cut little cables. A friend who was housesitting our subsequent apartment also had her bicycle, a real clunker, stolen from the courtyard.

One night I was waiting for takeout at the American burger Imbiss – in which, I have to say, the gentlemen behind the glass (one taking orders, ringing people up, putting the finishing touches on orders, the other doing the cooking per se) are often too stoned for even my hazy/lax/low standard...I mean, come on, guys (but the burgers are very good, it's true) – and I was fidgeting with my "Leatherman Micra," a Christmas gift from one of my brothers which had graced my keychain for more than a decade. Upon arriving home with the food and raising my keys to the door lock, I discovered that my beloved knife-tool was gone. On foot and by bicycle I retraced my path a few times, combed the ground by the Imbiss, but my knife/bottle opener/scissors/thingamajig had moved on.
(On the upside, I have finally mastered the art of opening beer bottles with a plastic lighter.)

Wintry Sunday morning. Family en route to the Bergmannkiez for brunch at the house of some friends. I get a flat so we lock our bicycles on Körtestraße within sight of the U-Bahnhof Südstern and take the train. Wednesday night I return to the Körtestraße to collect my bike and discover that M's has merely been locked to itself for the intervening three plus days! However astonishing for me, this also seems more consistent with my personal image of Berlin, although of course one hears all the time that the beaters for sale at the Mauerpark Floh are usually hot.

Hanging out at the Spielplatz on Himmelfahrt, I spy a Kinder traffic jam forming around the peak of the tall metal slide. Some joker has attached an industrial-sized zip-tie to the railing at the top of the ladder, and its long tail is protruding in a way that distracts the older children and impedes the younger ones. I ascend and try to detach it; no go.
"If I had my trusty pocketknife, oh ho," I boast to the friend with whom I am chatting, "I would cut that zip-tie down! But I've lost it somewhere in the Graefekiez."
"Ah, then you have left something in Berlin," she says, "This means you will return." 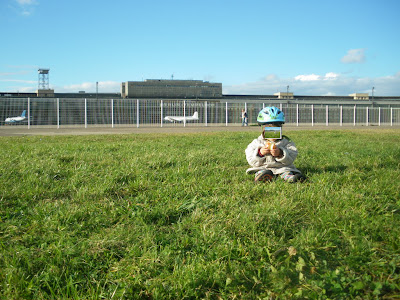 R and I are accustomed to seeing the vast Tempelhof terminal from the Feld side, when kicking a ball in the grass, say, or pedaling along the fence line that mirrors the terminal’s long curve – at a distance from which its repeating, homogeneous windows and columns look alternately movie-set-like and menacing. Occasionally, in connection with an event like fashion week, a large tent or stage pops up between fence and terminal. Lately R has wanted to stop and watch the crane operating where it appears that some work is being done to a section of roof. The scale, emptiness, decrepitude, and incongruous uses of the terminal all strike me as uniquely Berlin.
Late one rainy morning (at loose ends because the Tagesmutter is sick) we flip our perspective over to the Straße side...in the process of bringing a weeks' long bureaucratic encounter to a conclusion. Approaching the terminal from the east I recall passing in a taxi in the opposite direction when we had only been in Berlin for a week (we were moving by taxi from the Internationales Begegnungszentrum der Wissenschaft to our first apartment in Kreuzberg). It's an impressively curving, homogeneous chunk of cement, with a big scary eagle in the middle. It also feels deserted, for Berlin buildings have a mood.
We are visiting the Zentrales Fundbüro. A couple of months ago I received a very official looking letter informing me that an object of mine had been found. At first I believed it was some kind of scam. How did they track me down? Why did the letter ask me to bring cash to pay some kind of storage fee? This sounded fishy. I asked MS. She said that no, actually, this sounds legit. Another friend, VS, telephoned on my behalf (without such gestures of kindness, my “German,” such as it is, is frequently ineffective). Legit: a Gegenstand of great value and believed to be mine was found in Friedrichshain on March 8 or 9. A couple of weeks later this letter was dispatched. But I have no idea what the object is. I think hard about the very small number of possessions we have with us in Berlin. And I focus on the ones that might be perceived as valuable. I run to the file box. No, everyone’s passports and other documents are here. I haven’t been to Friedrichshain, except for the Oberbaumbrücke, in months. Is it our stolen bicycle? I have the paperwork for that, complete with serial number and purchaser name. Maybe they used our Anmeldung to track me down? I am completely stumped. Through VS, the Fundbüro lady tells me to come to the office and bring my passport.
This is how R (who only wants to know whether they have any toys) and I find ourselves here. The people of the Fundbüro are very kind, but they cannot tell me what the object is or show it to me. I have to describe it to them. And they cannot think of a way to ask me a question that could confirm my ownership but not reveal what the object is (they did confirm that it's not the stolen bicycle). Unless I can remember what I have lost, the mystery will remain unsolved. I really cannot imagine what this object might be, or how it came to be in Friedrichshain in early March...but the Fundbüro lady re-emphasizes its great value. Now I am dying to know why they believe the object could be mine. How did they even come to make that guess?

"'There, there,' Yossarian mumbled mechanically in a voice too low to be heard. 'There, there.'"