Denver. I am reading The Man Without Qualities on an elevated glass walkway between airport concourses. Behind me: terrifyingly flat, endless plains. I am sitting with my back to them so that, when I look up from my book, I see instead the snowy scapes of the Rockies, interrupted periodically by the silhouette of a jet taking off in the direction from which I've just come.

I am really hungry but cannot decide which food to try to eat; I approach the counter and recoil. Or, between chapters, I wander from one identical bookstore to the next – in which the only books on offer are "now a major motion picture," and the magazines are differentiated by the degree of shrillness with which they celebrate capitalism (on a scale of Economist to Inc.), perhaps with some firearms and naked women on the top shelf, for our more direct patrons. The bathrooms at the end of this walkway double as tornado shelters. My friend and former roommate OF lives and practices architecture in this city, but for some reason I have never visited...always coming and going from coast to coast. Someday, maybe.

Today I read and wait for the proverbial connecting flight that will plug me back into some reality – a quality (speaking of Eigenschaften) that this walkway lacks: in the nonplace of the airport, it is even more in-between, more non-. Perfect for disappearing into a long novel about civilization devouring itself.

In a bid to loosen Leo Fischel's daughter Gerda's attachment to Hans Sepp and his German nationalist and anti-semitic circle (at the desperate request of Gerda's mother Klementine), Ulrich visits Gerda and relates a (spurious) history of the earth's moon, which, he finally reveals, has no truth to it; in fact, he says, "the moon isn't really coming any closer to the earth."

Last year at this time I was finishing IQ84 in the Dallas airport, under more or less the same circumstances – a chrono-architectural link forms, not unlike the one between 1984 and IQ84; superimposition superimposes itself as mood. Perhaps, as Philip K. Dick would have it, "the empire never ended."

The tradition of the oppressed teaches us that the "state of emergency" in which we live is not the exception but the rule. We must attain to a conception of history that is in keeping with this insight. Then we shall clearly realize that it is our task to bring about a real state of emergency, and this will improve our position in the struggle against Fascism. One reason why Fascism has a chance is that in the name of progress its opponents treat it as a historical norm. The current amazement that the things we are experiencing are "still" possible in the twentieth century is not philosophical. This amazement is not the beginning of knowledge—unless it is the knowledge that the view of history which gives rise to it is untenable.

On October 16, 1996, Carolyn Forché gave a reading at my alma mater. By then I was two months gone, living in New York, but a certain friend secured a cassette recording for me and an autographed copy of Forché's indispensable The Angel of History. Over time, and repeated listenings, I adopted as my own an interstitial moment in the reading, appropriated even its diction and syntax, and sowed it in my mind like a land mine. And over the years, I would dig it out and gently unwrap it on the bar where I was drinking, say, and discussing the issues of the day with a friend.

Wisława Szymborska just won the Nobel Prize for Literature. She's 73 years old. She's one of the few women to win it. It's very nice that she won it. It would be nice if all of us could learn how to say her name, but it's hard, you know. She's in here; I'm very proud to say that Wisława Szymborska is in Against Forgetting. Because the Communists thought that her writing was too obscure – and morbid, they said – so they banned her. And I will read you a poem of hers so you can judge for yourself if you think that it's too obscure.

Here is her charge –
which I recall with unreal lucidity bursting in my brain as Amerika responded to 9/11
and as media endlessly circled the idea of A Return To Normalcy
(and as I debated whether "normalcy" was even a word),
and which flashed up again this summer while discussing the US presidential election with friends in Berlin,
and which flits up in the Now, again, in the wake of 11/9:

So we like to think, except, if we cannot contemplate the negative, too, then it's not thinking. "Wisława Szymborska has something to say about that," Forché continues, "and about the coincidence and happenstance and real fate of that. And this is her poem called 'Any Case'" (and this is the translation, by Grazyna Drabik and Sharon Olds, that Forché included in Against Forgetting and read that night, in 1996).

I should really get around to digitizing that Forché reading. Before night falls.

Last year (uh, 2014; read on) this thing in The Atlantic – culled, apparently, from an episode of Roman Mars’ 99% Invisible, which itself leans on this thing in the Smithsonian magazine by Linda Rodriguez McRobbie – happened across my desk on the same day as this thing (h/t Ingrid Burrington), and I thought that, to respond to the coincidence, I should dust off something apropos from a decade ago...

but before I got around to it (half a year flits past) FOLD was rolled out (h/t Ethan Zuckerman)...

the dusting-off has been completely abandoned, and you will not be invited to read "'Reach out and touch someone,' 1868-69," my 2005 essay on spiritualism, Planchette, the Ouija Board, and the telephone. But here are the epigraphs:

Ghost: Pity me not, but lend thy serious hearing
To what I shall unfold.

Hamlet: Speak; I am bound to hear.

On errands of life, these letters speed to death. –Melville, “Bartleby”

Strange, that my first passionate love letter should
have been addressed to a dead girl. Can they feel, I
wonder, those white silent people we call the dead?
Sibyl! Can she feel, or know, or listen?

As I have often done in the morning after dropping das Kind off at camp, I am at a table outside the Spätkauf, sipping espresso and sunning my face before beginning my work for the day. Up rolls an elderly man – sweatpants, old windbreaker, sandals with socks (natürlich). Rolls because he is using a walker with wheels and a handbrake. And because the door into the Späti is a big step up from sidewalk level, he parks there, just at the threshold, and shouts in his morning greeting. The man inside asks him what he would like. It appears they have done this before.

The shopkeeper spryly comes out from behind the Kasse, takes the beers from the fridge, and places them into the wire basket fixed to the front of the man's walker. Money is exchanged, farewells also. And then, with a creek and the tinkle of glass bottles – a uniquely Berlin tintinnabulum – the elderly man wheels off over the paving stones in the direction of the Schlesisches Tor. After pausing briefly to chat with another man, he continues his slow progress toward...home?

This list of Some Things I Will Miss About Berlin was drawn up hastily on June 26, 2013, and revised, NYE-style, December 31, 2015. Evidently in my barely-employed Hausfrau years I only ate, drank, and bicycled the hugeness of Berlin... 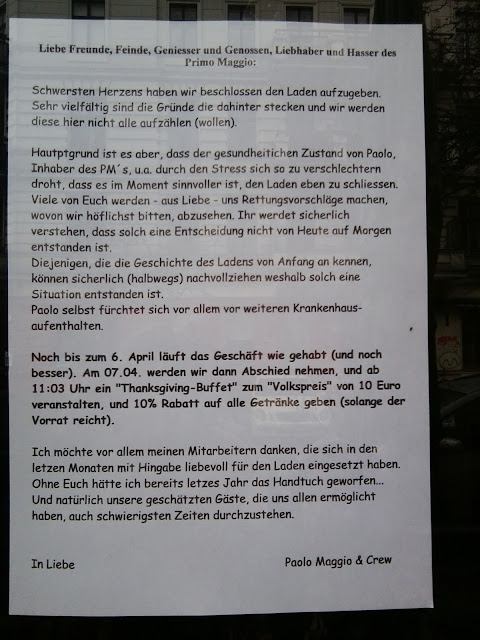