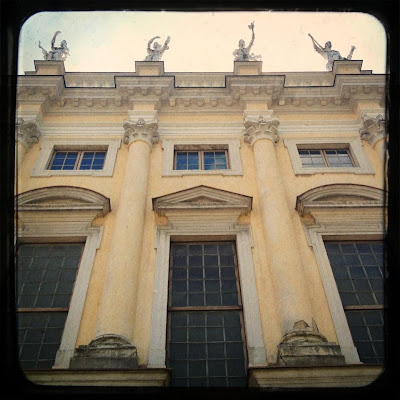 As I was saying, The Decline of the German Mandarins is a terrific companion for The University in Ruins.

Visited PK + RS in PDX over the holidays. PK asked how things are going in NYC. I repeated something that I've been saying to MK for awhile: that I've begun to feel...not uprooted, but un-rooted. I no longer feel at home anywhere. I move from city to city, always just a year or a few years too early or too late. Always -jected in some way, floating. Desychronized from my own prior experiences of a place, a scene. Not there.

"Of all the islands he'd visited, two stood out. The island of the past, he said, where the only time was past time and the inhabitants were bored or more or less happy, but where the weight of illusion was so great that the island sank a little deeper into the river every day. And the island of the future, where the only time was the future, and the inhabitants were planners and strivers, such strivers, said Ulises, that they were likely to end up devouring one another." —Jacinto Requena, Café Quito, Calle Bucareli, Mexico City DF, September 1985

From a project begun as a personal thing in PDX in June of 1995 and finished as an academic thing in NYC in May of 1997:


The nostalgia for destiny,
The destiny of nostalgia.
In order to meet Benjamin half-way, on common ground, or better: his ground, we must relinquish the idea of ground altogether. Common sense tells us that the exile is estranged, alienated, or divided from someplace or something—all the forms that can be organized as home. But exile in fact dissolves the entire concept of alienation and home.
The condition of exile initiates being-no-longer-from-anything.
The exile is simultaneously banished from everything, hence from nothing,
and by virtue of the estrangement from nothing, the exile cannot be at home anywhere,
The exile is always already not at home,
But there is no originary displacement,
The exile is displacement,
His nostalgia is for the void, that is, the messianic future.
In the writing of Benjamin, then, nihilism vies with melancholy — the nostalgia of the exile is for the condition of exile.

Salad days, baby. All this sounded so cool at the time, but I didn't buy it, not really.
Now it all sounds silly to me. Silly and true.

It’s easy to feel guilty here about not squeezing every last ounce of 'culture' from the place. After all, we know our stay is temporary – not tourist-temporary, but still.

Despite the motivations of guilt and temporariness, we’ve done very little in the way of exhibits and monuments and the like. I prefer Raucherkneipen and parks to galleries and museums. Our friend JD's visit will be a good forcing function to do some Denkmäler or whatever.

When I lived in New York I always felt anxiety that I wasn’t experiencing The Real City because I kept weird student hours, drank all the time, manipulated my responsibilities. I saw art and shows, classrooms and bars, not the inside of a rush hour 4 train. The Real City belonged to real people who had lives and real jobs and real obligations and struggles. People for whom the weekend was the weekend, not a continuation of the academic week by other means.

Now, in Berlin, the reverse: I feel anxiety that I’m not experiencing the city because I have a family, a domestic life, difficulties, obligations that prevent me from going out late and participating in the kinds of goings-on that, in NYC, made me feel divided from The Real City. I've been in Berlin for eighteen months, and I haven't stood on line at Berghain. 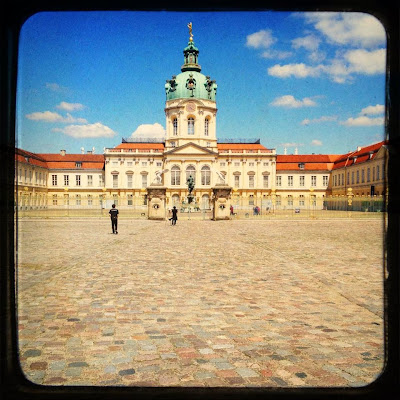 The author at Schloss Charlottenburg. Photo by Carmen Young.

I moved to leafy Bristol Street, in Cambridge, and immediately conceived a plan to document "The Grape Arbors of Wellington-Harrington." I would photograph the many grape vines planted in the neighborhood – they were usually entwined with a metal frame and wires or chainlink to form a carport – and then pin the photos into a Google map. (My landlord said the original cuttings were brought by Portuguese immigrants like his own parents.) I counted dozens and dozens over the years, all in Wellington-Harrington. In the end, I never photographed a single one. (Later, DA turned me onto the Bathtub Marys of Somerville; now we're talking.)

I struggle like an amnesiac against those eight years of Massachusetts. They are precisely a trauma. I can't recall them, but I experience their effects as a kind of deep internal bruising.

"Is it the stratified city or the prismatic city?" he had written in a forgotten notebook.

The Tempelhoferfeld at dusk, a knitting pattern of impatient bats take flight. OF + J are visiting. OF and I are discussing urban spaces, as always, and he casually lays something simple and clear on me that's transformed the way I look around when I'm on a city street. Of all the kinds of diversity we hope for in a neighborhood, age, perhaps, is the most important, for when people of all ages are living on top of one another, the street is alive around the clock. Children, young people, families, older folks, and everyone in between,—all have very different needs and use patterns. This plenitude of time and type of use is one of the things that undesirable gentrification interrupts. Pace Richard Florida, when the neighborhood becomes all coworking salons by day and hip bars by night, game over. You win, locusts.

"What stuck with me was the way in which Heidegger’s Nazism suddenly explained some of the ideas in Being and Time (sorry, Sein und Zeit) that formerly I had ignored as mere agrarian German romanticism — all that stuff about 'rootedness' and 'destiny.' It turns out that 'rootedness' was a code word meant to differentiate authentic Germans from 'wandering Jews.'" —David Weinberger, in a comment on his blog, July 11, 2010 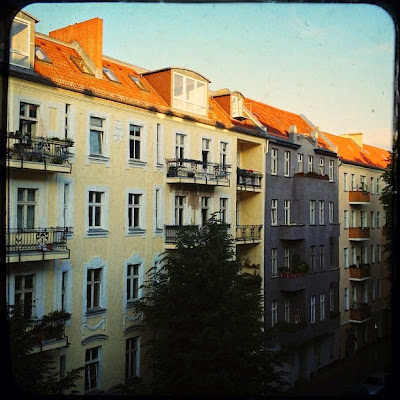 View from the balcony of a Hobrechtstraße apartment. Photo by Carmen Young.
Posted by pupil at 11:00 PM