This post first appeared on MOG, February 9, 2008. Since then various bits have been fixed, the photo added.

Ben McMillan died recently. I am really saddened by this news. My sincere condolences to Ben's fiance, family, and friends—and fans.

My friend and fellow fan Pleaseeasaur wrote me yesterday to point me to a Seattle PI blog with some songs and videos from the two bands Ben sang for: Skin Yard and Gruntruck, both of which I adored when I was growing up.

I still love both of these bands. For me, Skin Yard's music has aged better, maybe. Or perhaps it's simply that Skin Yard was one of the first bands, along with another SY band, Sonic Youth, to obsess me completely—and not only because of the coincidence of shared initials. Of course I have all of the albums and most of the singles recorded by Skin Yard and Gruntruck, and then some. My favorite Skin Yard incarnation is the lineup of Ben, ingenius Jack Endino, drummer Scott McCullum a.k.a. Norman Scott (who also drummed for Gruntruck), and bassist D. House (weirdly, a dozen years ago, I was involved in interviewing Daniel for a job to which he applied). Skin Yard's '88 album Hallowed Ground, which I'm listening to right now, feels classic. Every time I listen to Skin Yard, Hallowed Ground in particular, I get choked up on a wave of memories and flashbacks from my youth in the Pacific Northwest. It's raining, I'm driving through a seemingly endless tunnel of evergreens.

I tried to go to every all-ages show Skin Yard played in Seattle during my last two years of high school. Once I stayed for an especially long encore and missed the last Winslow-bound ferry. I slept on a wooden bench at the Colman dock. I was sweaty, it was cold, but I didn't care. Seems there was always a large pit when Skin Yard played, but I felt that it was a safe space, that someone would pick you up if you fell, people were smiling, laughing. I credit Ben's community-minded, almost fatherly, regard for his fans as the reason for these slam dancing utopias. I can't number the nights that my friend Josh and I drove around Kitsap County in his old Audi, listening to Skin Yard and smoking nasty Benson & Hedges menthols.—Or, driving along in an altered state, having to pull over during the song "G.O.D." because I was experiencing something like an epiphany. The song remains one of my favorites: the way Ben's saying "talk" over and over organically fuses into the rhythm of the song's opening moments to become a "tock," a haunting, extra bit of percussion, of time.—Or, driving with Josh to Olympia to see Nirvana, singing along to "Drunk on Kerosene" at the top of my lungs. Ben's long scream in the song "Hallowed Ground" is one of the most spine-tingling rock vox in my music collection. I had the Skin Yard t-shirt with the nasty Giger image on the front and "too much acid / too many people / too little to do" on the back. My mother refused to touch the shirt, so its purchase marked the moment when I began doing my own laundry. I wore the shirt so frequently that, when it was retired to a cedar chest with other scrapbook-like objects, only the printing was holding it together, the cloth having disintegrated.

I think Ben was from Poulsbo, the tiny town where I grew up, but, at least, he hailed from the same side of the sound? maybe Suquamish? I think I wanted to be Ben McMillan. After my first Skin Yard show, I started wearing jeans and black leather belts and shoes like Ben. I grew my hair, had earrings. I formed a band with friends, The Dorx. Whether unconsciously or not, I tried to imitate Ben's vocals. Lots of effects, tight versification, some religious themes. I listened to Gruntruck's album Push on a daily basis during my sophomore year in college. It was the soundtrack for my bout with a certain addiction and of my coming to my senses several months later and recommitting myself to my studies.

One of my birthdays coincided with a Gruntruck show at the OK Hotel (I can't quite triangulate the date, must have been my 18th, spring of '92). The logic of the coincidence was compelling: I took the ferry to Seattle for the occasion. Gruntruck played with savage precision that night. "Move in Silence" was perfectly executed and listening to it now, years later, gives me a shiver. Ben high-fived me when I was being squeezed against the stage by the moshing crowd behind me. He was drenched in perspiration, his long hair matted to his forehead. I was ecstatic. The evening is captured in the black and white photo inside the Push jacket: the top of my head can be seen just below Ben on stage; I am facing the crowd, as though part of the performance, which I was, for, despite the aural brutality of his music, there is beauty: Ben had a way of linking himself to the audience to create a momentary antidote to alienation. He will be missed. 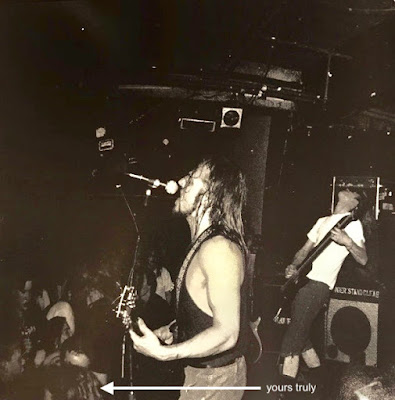